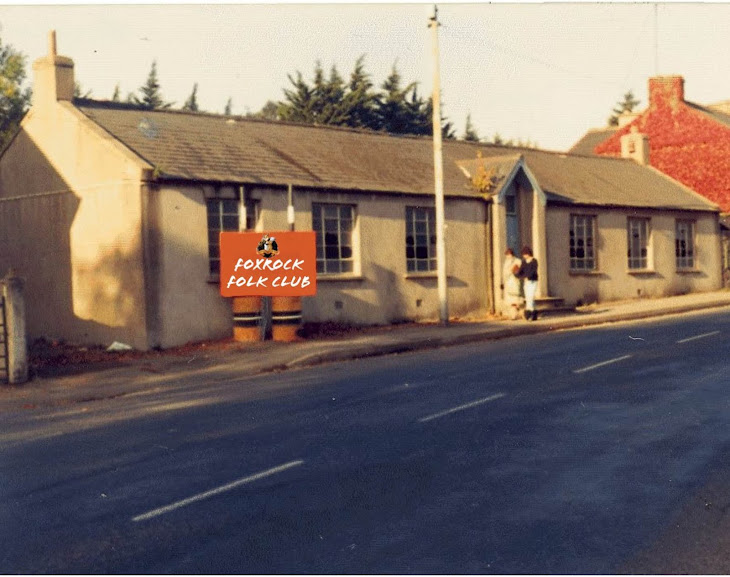 The Location of Foxrock Folk Club

As Luke Kelly remarked when he played the club in December 1972, a folk club in the suburb of Foxrock was a somewhat unlikely combination. Probably even more unlikely was the fact it was organised and run by teenagers and managed to attract to Foxrock some of the biggest names on the Irish music scene (see Folk Club History & "Local and Visiting Artists").

The aim of the Foxrock Folk Club Project is to (1) research the history of the club (2) develop a club archive and (3) create a space in which people who played at the club or attended some of the sessions can share their memories of what was an unique musical and cultural experience.

fRoots is the world's leading magazine covering modern and traditional music with roots from around the globe and it has a positive, if brief, review in it's June issue.

NUMBER ONE IN NENAGH!

Great to see in the figures gathered by Irish Music Magazine that the CD was the number one best-seller last month in McQuaid's Music Shop in Nenagh, Tipperary. Judging by it's web site, McQuaid's looks like a excellent music shop with an extensive range of musical instruments as well as CDs. Nice to know that such shops are thriving around the country.

In another sign of the fine musical tastes in Tipperary, Noel Fahy has also being playing tracks from the CD on his programme 'The Crooked Road' on Tipperary Midwest Radio.

Of course, Tipperary has a close link to the album anyway as the legendary blues singer, Red Peters, was born in Tipperary town and features on four tracks.


Posted by Jeremy Kearney at 14:53 No comments:

It has been very interesting to follow the progress of the album on radio stations across the world - from Tipperary Mid West Radio to 2XXFM in Canberra, Australia and many points in between - and to hear what tracks are chosen by particular presenters. One of the aims of the album was to try and reflect the diversity of different musicians and types of music that were featured at the club so I'm very pleased that all 36 tracks from the CD have been played on a radio station at some point.

However it is also interesting to hear which recordings have attracted particular attention and to see that among the musicians one might expect to get a lot of plays, like Luke Kelly, Andy Irvine, Ronnie Drew, Al O'Donnell, etc, the solo guitar tracks of Johnny Norris have been getting a lot of air time.
In particular, his Ragtime Medley, which is a combination of (at least) three ragtime tunes and ends with a blistering version of 'Bill Bailey', has clearly grabbed many listeners attention. On this track the speed and technical virtuosity of his playing is amazing.
As far as I know, this piece and the other track with Johnny singing and playing 'All My Friends Are Gone' (another masterpiece) are the only available recordings of him playing solo.

He also appears on the album with the terrific acoustic blues band, Dirty Dozens, which included another great guitarist, Gerry Doyle, one of Ireland's greatest blues singers, Red Peters and the wonderful harmonica player, Shay Fogarty.

Along with other musicians like Brian Fry, Ed Deane and many more, the blues scene is Dublin in the 1960s and 70s undoubtedly included many highly talented artists (some still playing, I'm pleased to note).
Posted by Jeremy Kearney at 18:28 No comments:

HAVE CD WILL TRAVEL

The 'Live at Foxrock Folk Club' CD is continuing to spread the musical word around the globe. Recently copies have been sent to Alaska, Hawaii, Australia, Japan, Venezeula, the Irish Embassy in Buenos Aires and throughout Europe. Incidentally, it's also selling well in Foxrock!
Posted by Jeremy Kearney at 22:14 No comments:

The folk club and the CD featured on RTE Radio 1 Arts programme 'Arena' on Thursday 24 March and it was a real pleasure to be interviewed by Jim Lockhart of Horslips fame. The band actually played Foxrock on 6 Feb 1972 so Jim had a direct link with the club. The other special thing about the interview was that Eileen Heron, the producer, had gone to considerable trouble to arrange a link, via telephone, with Kevin McCann in Hawaii, as she was fascinated to hear from the 15-year old school boy who had made the original tapes.
It was great to hear Kevin describe in detail of the making of the recordings, including the regular chore involved in carrying the heavy reel-to-reel recorder to and from each session. Of course without such a practical labour of love the CD would not exist.
Jim played a nice selection of three tracks from the CD - Luke Kelly singing 'The Unquiet Grave', 'L'Oiseau' by Supply, Demand and Curve and We 4's version of 'Summertime' featuring the superb vocal by Suzanne Murphy (who unsurprisingly went on the become the principal soprano of the Welsh National Opera).
As an example of how the club encouraged the teenage participants to move from the local to the global (in both musical and lifestyle terms) Kevin also talked about his current home in Hawaii and his involvement in the two biggest optical telescopes in the world at Keck Observatory. Apparently the observatory has been responsible for discovering the majority of new planets found in the last 20 years. However, he couldn't confirm the rumour that due to the loudness of the Horslips gig at the club, the observatory had picked up traces of the noise created then still circulating in space!


On Radio 2XXFM in Canberra on 19 March, Declan O'Connell presented a whole two-hour episode of his programme 'Rebel Chorus' focused on the folk club. He played a wide range of tracks from the album, including some jazz and blues numbers and the tracks were interspersed with an interview with myself on the line from Newcastle.
Declan worked hard to bring the programme together and I was very pleased with the end result.
It was great to have the opportunity to talk about and reflect on the experience of being part of the club with someone who is so very well versed in the music and the artists who played there and also knew the Dublin scene at that time. I hope the programme's audience in Canberra also found it enjoyable.
Many thanks to Declan, 'Rebel Chorus' and 2XXFM for making it happen.
Posted by Jeremy Kearney at 17:43 No comments:

'LIVE AT FOXROCK' IS STORMING UP THE CHARTS!

Claddagh Records has the 'Live at Foxrock Folk Club' album at No.6 in its Top Ten of best-selling albums.
http://www.irishmusicmagazine.com/charts/top-10-april-2016/


Posted by Jeremy Kearney at 13:38 No comments:

WHERE TO BUY THE ALBUM

can be purchased in Ireland from:

And in the UK and worldwide from:

For the first time a selection of unique recordings from Foxrock Folk Club are now being made available on CD.
They include:
- rare, and in some cases, previously unreleased recordings by traditional and folk musicians like Luke Kelly, Andy Irvine, Ronnie Drew, Al O'Donnell, Sonny Condell and Dónal Lunny
- live recordings of legendary Dublin blues artists like Red Peters, Brian Fry, Johnny Norris and the acoustic band, the Dirty Dozens
- tracks by one of Ireland's finest traditional and mainstream jazz bands, the Butler Fox Jazz Band, led by Rock Fox and Phil Butler
- the unique Irish progressive group, Supply Demand and Curve
- and highly popular musicians and groups like We 4, Danny Doyle and The Gingermen.

These recordings from the 1970s are now available worldwide and can now be purchased in Ireland from:

And in the UK and worldwide from: 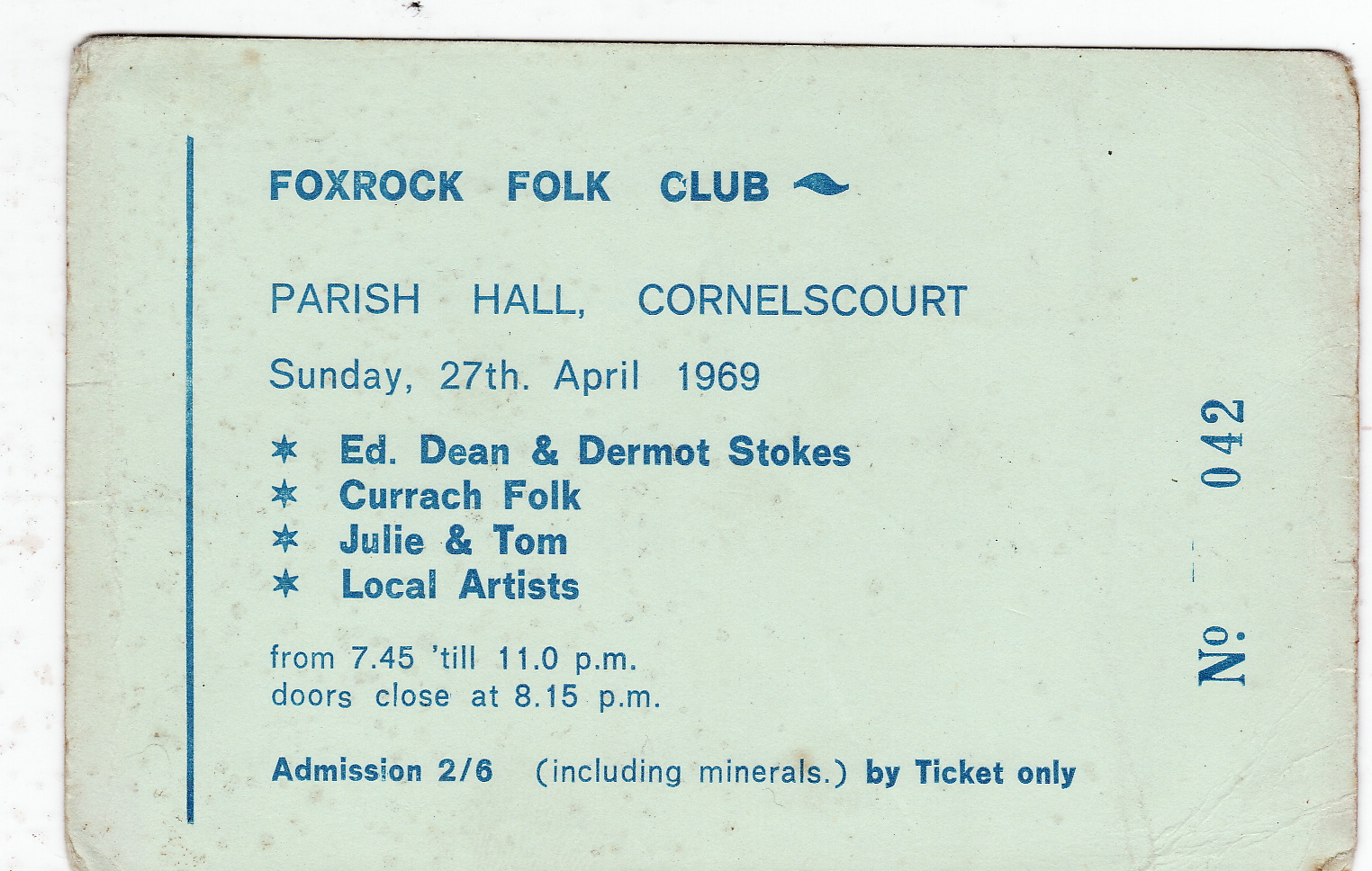 The Foxrock Folk Club ran from 1969 to 1973 in the Parish Hall in Cornelscourt (see Folk Club History).
Did you play there? Were you in the audience?
As a member of the original folk club committee I am trying to gather as much information as possible about the club, the artists who played there and the people who attended the sessions.
The section on "Local & Visiting Artists" lists the names of many of the artists and groups who played at the club and the dates of their appearances. While some of the names are now well known, both nationally and internationally, I would be very interested to hear more details of some of the lesser know participants, and also of any names that are missing.
As this is the 40th anniversary of the Foxrock Folk Club, there are going to be a number of events to commemorate the club and its activities (see Latest News).
Join in the blog and post your memories and stories. 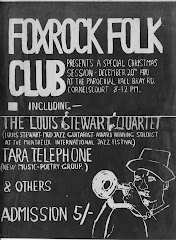 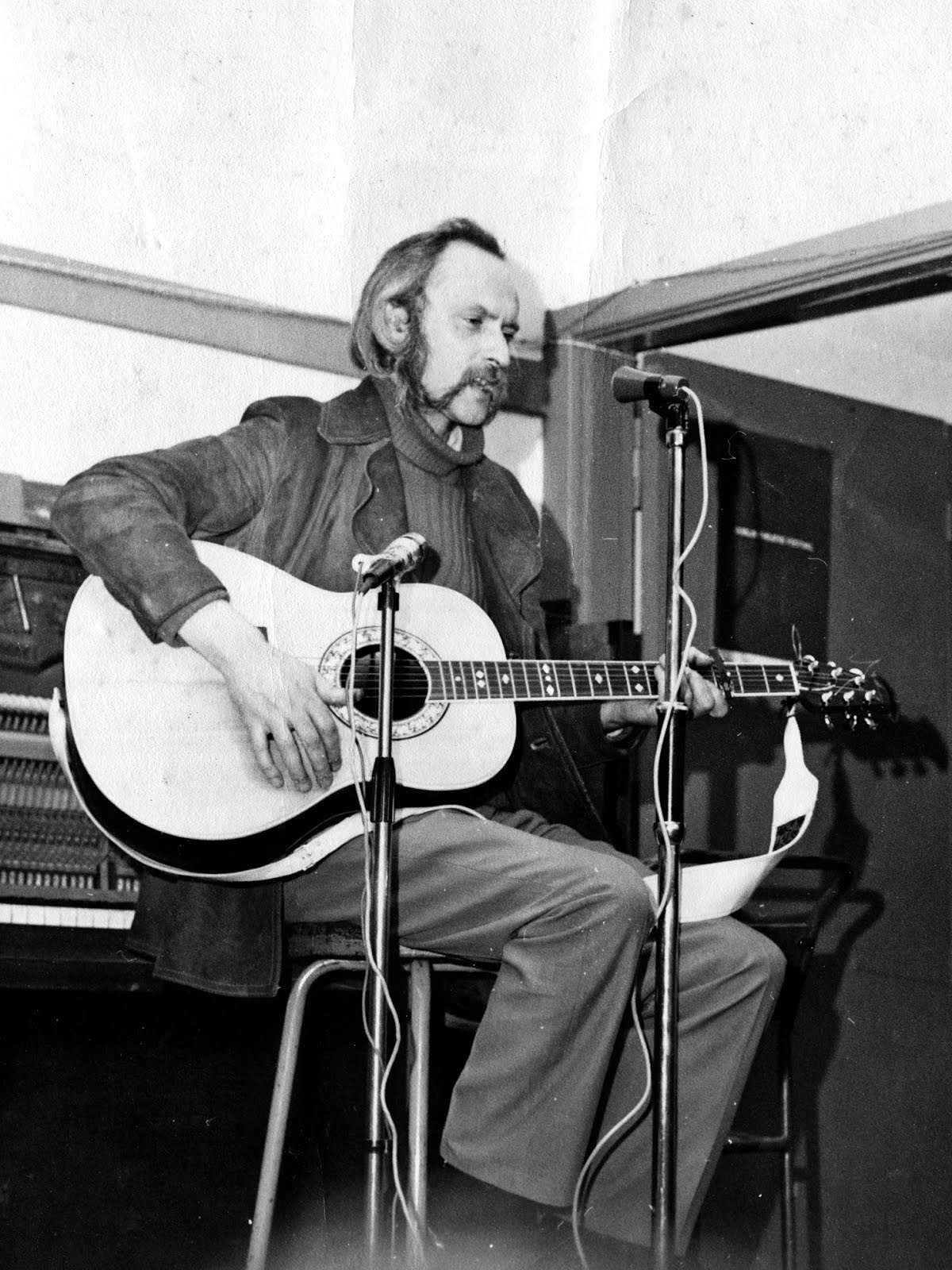 The Foxrock Folk Club was established in 1969 by a group of young people, all in their teens, who lived in the local area of Foxrock in South County Dublin. They were all interested in music and involved in various community and social activities. There are different accounts of how the club actually took shape but what is clear is that the first session in April 1969 in the village hall in Cornelscourt. The club then ran for nearly four years presenting a wide variety of different musicians and artists.
The first session was a fairly relaxed affair that involved a variety of different local and visiting acts and was attended by an audience between 50 to 60 young people from the local community, the majority still at school and none aged over 20. Also the system for advertising sessions was suitably parochial as it involved producing tickets, which were then circulated around the schools. Hand drawn posters were also put up on lampposts around the local area. Although none of the organisers had ever been in a folk club in real life, the club grew quickly from small beginnings to encompass folk, traditional and jazz music and poetry and theatre.
It ran consistently on Sunday nights every two weeks between October and May for the next three and half years. From somewhat amateurish beginnings it developed rapidly and was soon presenting some of the most important names on the Irish music and arts scene. These included sessions by such now legendary performers as the Chieftains, Luke Kelly & Ronnie Drew of the Dubliners, Donal Lunny & Andy Irvine, two of the founder members of Planxty, Al O'Donnell, Horslips, Louis Stewart, poets like Roger McGough, Brendan Kennelly, Peter Fallon and Pearse Hutchinson and actors such as Niall Tobin and the Abbey theatre group.

Therefore, this year (2009) will be the fortieth anniversary of the start of the club and a number of the people who were part of the orgainising committee are planning a commemorative 40th session in June. Many of the original artists who played the club are now well known, and have expressed an interest in participating. There is a good deal of memorabilia available on the club, including admission tickets, posters, photographs, the artists book, the finance book, and over 20 hours of tapes of the artists performances. It is hoped to have an exhibition of this material at the same time as the 40th anniversary concert. 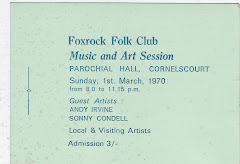